Day 1 : ISTANBUL
Arrive in Istanbul. Transfer to hotel. Rest of the day and evening at leisure.

Day 2 : ISTANBUL
In the morning drive to the old town. Visit the Blue Mosque and the Hippodrome where chariot races were held in Roman times and Hagia Sophia, Church built by th emperor Justinian in the sixth century. After lunch, tour the Topkapi Palace museum with its priceless jewelled objects and the Porcelain Collection and the Mosque of Suleyman the Magnificent. Evening at leisure.

Day 3: ISTANBUL
Morning, visit the Spice Market on the Golden Horn shores. Cruise along the shores of the Bosphorus by ferry.Drive to the Asian side of Istanbul and view the city from Camlica Hill then visit Beylerbeyi Palace. Return to the old city for shopping at the Grand Bazaar.

Day 4: ISTANBUL - CANAKKALE
Morning ride for Canakkale. After lunch in Gallipoli. Cross the Dardenells by ferry boat to Asia. Visit the site of Troy, the homeric city. Dinner and overnight at Canakkale.

Day 5: CANAKKALE - IZMIR
After a lovely drive to Pergamum, lunch in town. Visit the Acropolis of Helenistic Pergamum. Among its buildings are the Altar of Zeus and the temples of Trajan & Dionysus. Visit the Asclepion, the earliest health center of Asia Minor. Continue to Izmir. Dinner and overnight.

Day 6: IZMIR - KUSADASI
Morning drive to Ephesus. Visit the Basilica of St. John’s, his tomb and the House of Virgin Mary. Afternoon tour Ephesus with its legendary marble streets, the magnificent amphitheatre, Hadrian Temple and Celcus Library. Reach Kusadasi for dinner. In evening stroll through the shops and overnight. 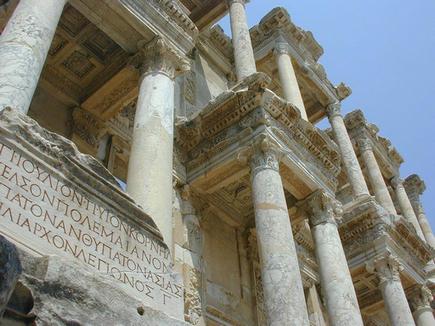 Day 7: KUSADASI
Discover the Ionian cities in the region. Priene famous with temple Athena, Miletus the political leader of the Ionian league and Didyma an oracular center with Temple of Apollo. Late afternoon at leisure in Kusadasi .

Day 8: KUSADASI - PAMUKKALE
After breakfast drive to Pamukkale. En route visit Aphrodisias, the city of Aphrodite, an ancient city of sculpture and arts. Tour the theater and the magnificent stadium. Afternoon arrive to Pamukkale, the "cotton castle" so named because of limestone hot springs and spectacular white rock formations. Overnight in Pamukkale.

Day 9: PAMUKKALE - ANTALYA
After a leisurely breakfast, stroll in the ancient Roman city of Hierapolis with theatre, baths, necropolis. Continue on the "Turqoise Coast" of the Mediterranean. Dinner and overnight in Antalya..

Day 10 : ANTALYA
After a leisurely breakfast, full day exploration of the ancient Pamphylian cities; Perge with colonnaded streets, and the stadium, Aspendos theatre whose acoustics unrivalled. After lunch, spend the time at the seaside town of Side, visited by St. Paul and which was a bishopric of the early Christian Church. Stay the night at Antalya.

Day 11 : ANTALYA - KONYA
Morning head north to Konya, the capital of the Seljuk Empire. On the way visit Catalhoyuk, one of the oldest settlements of the world and home to ancient Neolithic people. Dinner and overnight in Konya.

Day 13 : CAPPADOCIA
Start out early for a full day’s excursion into the magical land of Cappadocia. The region was first settled by ancient people then home to Romans, early Christians, Byzantines and Seljuks. Visit Goreme Church Valley, Zelve, Avanos, Ortahisar and Uchisar, and see some of the many churches carved into the rocks. Dinner and overnight.

Day 14 : CAPPADOCIA - ANKARA
Early morning, leave Cappadocia for Ankara, the capital of modern Turkey. In Ankara visit the remarkable Anatolian Civilizations Museum. Among its treasures are Neolithic frescoes, Bronze Age emblems, the remains of the fabled Phyrigian king Midas, as well as many objects from the Hittites.Pay a visit to the Mausoleum of Kemal Ataturk. Overnight in Ankara.

Day 15 : ANKARA - ISTANBUL
Transfer to airport for a short flight to Istanbul for connecting flight home.

Return to   THE ROUND TRIPS page